skip to main | skip to sidebar

Cemeteries of Cass County, IN

Cemeteries of Howard County, IN

Cemeteries of Miami County, IN

You will find burial listings, tombstone photos and obituaries at these sites.
Posted by Debby at 2:19 PM 2 comments:

Visit Shiloh Cemetery at:
http://edanddebby.com/HCC/Shiloh/index.html
I uploaded the update with 437 obituaries and death notices yesterday and I am hoping many will find it helpful to their search.
Debby
Posted by Debby at 10:50 AM No comments:

My most annoying brick wall concerns a set of great-great grandparents, Thomas Jackson POLK and his wife Sophia (HARNESS).

There is no death record in Howard County of either Thomas J. or Sophia Polk, but both signed a deed tranfer to son-in-law, Edward M. Rioth on 10 Aug 1886. On 24 Sep 1887, Edward M and Martha J Rioth sell land to only Sophiah Polk, leading me to believe that Thomas has died in the interim. On 11 Feb 1889 that piece of land is sold at delinquent tax sale to James D Johnson. Document states land returned delinquent in the name of Sophia Polk etal. The etal part makes me wonder if Sophia has died at that point in time.

I have been unable to locate an obituary for either. I have run into many descendants of this couple, however, no one has found any information about the deaths of either. I descend through Edward M and Martha J (POLK) RIOTH. Any help would be appreciated.
Posted by Debby at 10:28 AM No comments: 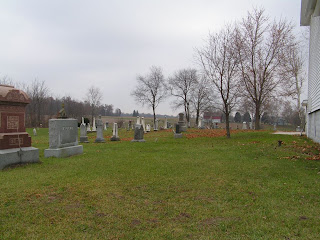 This week I added photos and an update to Cass County Bethlehem Methodist Episcopal Cemetery - http://incass-inmiami.org/cass/cemeteries/bthlhmme/ Mark Brubaker is the photographer. Thanks Mark for all the time and resources you spent on this project.
Posted by Debby at 11:44 AM No comments:

Debby
How does one define herself? I have lived long enough to have a long definition. Daughter, sister, cousin, granddaughter, friend, wife, mother, grandmother. Artist, teacher, gardener, seamstress, crafter, Christian, genealogist, chief cook & bottle washer, creative person. I have always wanted to try different things. How would I know what I might like if I never tried it? I have 3 adult children - Ed, April and Amber. Ed and his wife Julie have 3 children - Anna, Emma and Ed III. April and husband Ryan have 2 children - Rainey & Owen. Amber is our youngest and she is still single. I have 2 blogs. One on Indiana Cemeteries - http://debbysindianagenie.blogspot.com/ and one one my creative journey at http://lunazul13.blogspot.com/