skip to main | skip to sidebar

I have just updated this cemetery with photos submitted by Ed Castor and an article that was in the Pharos Tribune. 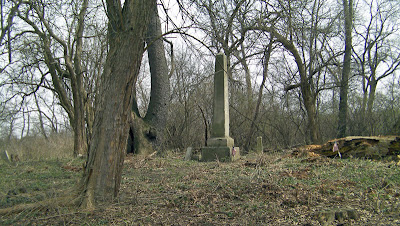 September 11, 2001  We all have memories of this date if we are old enough and conscious at the time.  That day was to be a big day for me and my colleagues.  We were driving in the KHCPL Van to the Federation of Genealogical Societies Quad Cities Conference in Davenport, Iowa that day.  In the busyness of gathering my belongings to take on the trip, we had not turned on the television or radio.  I arrived at the library just a bit early not knowing that the first attack had already happened.  Michele, our boss, had decided to forgo this conference and to stay in Kokomo to hold down the fort at the library.  I was checking my email when Michele arrived and told me our country was under a national emergency.  I was stunned, not knowing what that meant.

I quickly looked online to see what I could find.  The news was not nearly as complete as I imagine it would be now in a terrible disaster.  And it was time to leave as my co-workers Ron and Janice had arrived.  They had seen or heard the news.  We loaded the van and set out to pick up Julia who was riding with us to the conference.  By the time we got to her home I believe the second tower had been struck.  That was a very quiet trip across half of Indiana and the state of Illinois with only the radio constantly updating us on what was happening in the east.  Shocking.  They were telling us that all flights were being canceled.  It was rather strange not seeing a single plane in the sky.  Traffic was light due to our paralyzed nation.  Then we saw the large plane flying from east to west, an eerie sight, we were sure we had seen Air Force One.

Here is an email I sent the next day.
"Hi my dear friends,
Wanted to let you know that we arrived safely.  With all the flood of news yesterday, we had a quiet trip and arrived about 4:30.  We listened to the radio all the way to Davenport, so had to use our imaginations to visualize the great terror out east.  I prayed a lot and as quiet as we all were, I think there were lots of silent prayers being sent from the library van.

I learned that my cousin Ruth's husband flew in to LaGuardia from Japan yesterday morning, safely.  I am sure they had some very frightening moments since they live and work in NY-NJ area.

I was finally able to call Ed and Amber this morning before Amber left for school.  Long distance lines have been hard to access since we arrived.  So this may be the only way to efficiently communicate.

I am on the computer at Davenport Public Library.  I am thankful to have access here.

We still don't know if several of the conference speakers will get here since several were to fly in from one of the coasts and we heard there were 13 foreign (would be) attendees stranded in Spain."

The conference went on.  Our first day was for librarians.  I had to step out during one presentation.  I went to the restroom and cried for awhile.  I just wanted to be with my husband and my 15 year old daughter, Amber.

The conference hotel had set up televisions in all the hallways in the conference area.  I would go there every break, mesmerized by the news.  At every break more chairs would appear in these areas.  There was a woman attending who had a son who worked in one of the towers.  It was at least two days before she knew he had made it to safety and was alive.  There were attendees whose plane was grounded in Chicago who found each other, rented a car and drove the last leg of the trip to Davenport.  Many of the speakers added talks to their schedules to fill in for speakers who could not get there.

When the conference was over, we happily headed home to our loved ones.

Debby
Posted by Debby at 8:44 AM No comments:

Updates have been made to Grable Cemetery in Cass County.  I found a couple of death notices and was sent some images by Matthew Burrell of Noblesville to share with you. 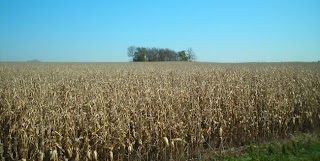 As you can see the cemetery lies in a woods way off the nearest road behind a large field.

I did quite a bit of updating to Pisgah Presbyterian Cemetery in the past 2 days.

I'm not sure I am meant to be a blogger

I'm not sure I am meant to be a blogger, although I think it is a great idea, it is just not something I think about doing.  On the other hand, I am passionate about putting cemetery information out there to help you with your research in Cass, Miami and Howard Counties.  I work on something cemetery related nearly every day.  I just don't talk (or) write about it much.  I realized a couple of days ago that this blog may be giving some of you the wrong idea about what I am doing.  This happened when I got an email update from a wonderful sexton who had heard a rumor that I was no longer updating the cemetery sites.  This is so not true.  There is so much going on behind the scenes that you may not see happening.
With 117 cemeteries in the database, plus a few others that have not been migrated over, this project is very time consuming.  Ed Beheler, John C. Anderson and Tom Quinn also manage cemeteries that are not included in my database.  I love that I have sextons who will send me updates on a regular basis in easily managed amounts.  It makes what I do so much easier.  One thing that I am guilty of, is updating it on my computer, but not generating new files to upload, so that you can see the updates.  I am going to really work on that as I have time.  I have already been making my list of those that need to be checked and then uploaded to the websites.

My current big project is Greenlawn Cemetery at Mexico, Miami County, Indiana.  I am hoping to get up there to photograph headstones when it warms up and the grass turns green.  I am not fond of cemetery photos taken with the bleak colors of winter, nor do I enjoy freezing to death.

Please try not to complain too much, unless you are willing to devote the hours to something like this.  It is hard to walk in another's shoes.

Stay out of my databases!
Blessings to all, Debby
Posted by Debby at 3:27 PM No comments:

Sorry I have been so out of touch for months. It's not because I have stopped doing cemetery work, because I keep busy with it. When you consider that I have 112 cemeteries in my cemetery database program, it is easy to not notice updates and changes. However, at the bottom of each cemetery page, the last update date is listed.

For anyone in the cemetery business, John C. Anderson has a new program geared just for maintenance of cemetery records, lot records, ownership, etc. He calls the software "In Stone." Please contact John for more information.

I have been rebuilding my Ever-Rest Memorial Park Cemetery database. This cemetery is in Cass County east of Logansport on old 24. There are many Miami County people interred there as well as Cass County people.

While browsing the Logansport Pharos Tribune site this afternoon, I plugged in our somewhat unusual surname and got a hit! The story (published April 15 2010) was about remains found, possibly from a long forgotten burial ground called Reed Private Cemetery.

Anyway, I had to share my excitement that one of my websites was given credit for solving a mystery and Ed and I were mentioned in the article.

I'm glad to have provided a source to help others.

Debby
How does one define herself? I have lived long enough to have a long definition. Daughter, sister, cousin, granddaughter, friend, wife, mother, grandmother. Artist, teacher, gardener, seamstress, crafter, Christian, genealogist, chief cook & bottle washer, creative person. I have always wanted to try different things. How would I know what I might like if I never tried it? I have 3 adult children - Ed, April and Amber. Ed and his wife Julie have 3 children - Anna, Emma and Ed III. April and husband Ryan have 2 children - Rainey & Owen. Amber is our youngest and she is still single. I have 2 blogs. One on Indiana Cemeteries - http://debbysindianagenie.blogspot.com/ and one one my creative journey at http://lunazul13.blogspot.com/